Harry Arter has revealed that Harry Redknapp helped him to break into the Irish squad.

The 26 year old midfielder finally made his competitive debut for Ireland in yesterday’s stunning 1-0 win in Austria.

Arter is friends with Redknapp and his family, and the English boss introduced the Bournemouth midfielder to Martin O’Neill in a car park in 2014.

“I have been friends with Harry Redknapp and his family for many years and I saw Harry walking across the car park at Fulham with Martin Oâ€™Neill back in 2014 and I had to go an introduce myself,” he told Yahoo Sport.

“It was a chance meeting, but it turned out to be very useful because it gave me a chance to tell the manager about my ambitions to get into the Ireland squad.

“The manager was fully aware that I qualified through my grandparents and that I had played for Ireland at junior levels, but I think the meeting helped.

“He came to watch me at Bournemouth a few weeks later and when he announced the next Ireland squad, I got my first call-up. It all happened very quickly after that first meeting. It is funny how these things work sometimes.

“Iâ€™m not sure if that car park encounter helped, but hopefully he could see how desperate I was to play for Ireland.”

Arter enjoyed a promising debut, and will be eager to cement a place in Martin O’Neill’s starting eleven. 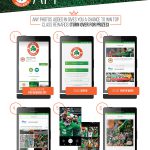