A Raheem Sterling goal and a Tyrone Mings own goal handed Guardiolaâ€™s side an important win, which sends them second in the Premier League table.

Cameras caught Guardiola offering condolences to Arter over the loss of his daughter RenÃ©e in 2015, with the City manager appearing to say â€œIâ€™m so sorry for what happened to you and I wish you all the best.â€

Guardiola spoke about the incident in his post-match press conference.

“He will be a father soon so I said big congratulations to him and his partner because I know what happened in the past, and, hopefully, the baby will be well,” he said.

Arter also spoke about Pepâ€™s gesture after the game.

The Irish international talked to the Daily Echo about the gesture, calling it an â€œunbelievable touchâ€.

“He offered his best wishes for me and my partner this week, which was an unbelievable touch,” Arter told the Daily Echo.

“He is someone I have a massive amount of respect for. I watched his Barcelona teams – and look at his Manchester City side tonight.

“For me, he is the best manager in the world. I don’t think there’s anybody close to him and what he has achieved.

“For him to offer that to me, I respected it and accepted it with a smile on my face.”

WATCH "For him to offer that to me, I respected it and accepted it with a smile on my face." https://t.co/kBQf1qh63K https://t.co/venUzOD3Hf 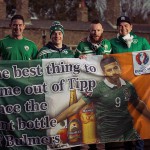