Gareth Bale will miss Wales’ World Cup qualifiers against both Georgia andÂ the Republic of Ireland through injury.

The 28 year old suffered a calf strain in Real Madrid’s 3-1 win overÂ against Borussia Dortmund in the Champions League last Tuesday, and missed the Spanish champions’ clash with Espanyol as a result.

Madrid manager Zinedine Zidane initially described the injury as “a small complaint,”Â butÂ the former Spurs winger has now been ruled out of Wales’ last two Group D qualifiers, which may tip the scales in Ireland’s direction ahead of next week’s potentially ‘all or nothing’ fixture in Cardiff.

“He could have played with us (against Espanyol) but I preferred to leave him out as he had a small complaint,” Zidane said on Sunday.

“After so many games at the start of the season and four months of injury, he was suffering after the game in Dortmund.”

Chris Coleman’s side travel to Tbilisi to face Georgia before hosting the boys in green next Monday. Wales currently occupy second place in Group D, four points behind leaders Serbia and one point above Ireland.

Bale has scored 26 goals in his 68 international appearances, and his loss is a major blow to Wales’ hopes of qualifying for next summer’s World Cup in Russia.

His absence could lead to a first international start for Liverpool teenage sensation Ben Woodburn, who scored a screamer to hand Wales a 1-0 victory over Austria onÂ his Wales debut last month, and also provided an impressive assist in his second appearance against Moldova.

Striker Tom Bradshaw has been called into the squad as a replacement for Bale. 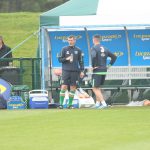