SIPTU have asked the Labour Court to make a ruling on the reversal of pay cuts to FAI staff.

FAI employees were hit with pay-cuts in 2012 as the organization struggled financially, amassing a â‚¬64 million debt.

Those employees are angered that they havenâ€™t seen any pay restoration since that difficult period, despite the upturn in FAI finances (The FAI reportedly banked â‚¬11m from Euro 2016).

According to the Irish Independent, roughly one third of the FAIâ€™s 167 members are members of SIPTU.

SIPTU have called for a third-party analysis of their accounts, as explained by SIPTU sector organiser Denis Hynes.

â€œWeâ€™re looking for restoration of the pay levels prior to the cuts of August 2012, which were to be in place for a period of 18 months only,â€ Hynes revealed.

â€œReceiving a paltry three per cent last June was simply not enough. We asked the FAI to engage with us in the Workplace Relations Commission (WRC) to find a resolution to this dispute but they declined to do so.â€

â€œOur members are feeling completely frustrated at the lack of progress in this dispute.

â€œIt left us with no option but to submit an application for a full hearing at the Labour Court, which we have now done. The case will be heard inside three months.â€

â€œAs part of the (Labour Court) process, we will be looking for an independent assessment of the FAI accounts.

â€œIn disputes where employers say they canâ€™t afford to pay their employees, unions are entitled to ask the employer to prove that is the case, which is where the independent assessors come in.â€

As of last night, the FAI had not responded to requests for their comments on the issue. 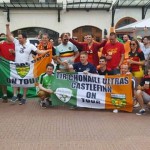