Cork City have won the first SSE Airtricity League title with two games to spare after their 0-0 draw with Derry at Turners Cross tonight.

The new Irish champions have drawn their last three games, but tonightâ€™s result puts them seven points clear of Dundalk, who have ended the season strongly with a string of wins.

The Leesidersâ€™ stunning start to the season â€“ in which they won 21 of their first 22 matches â€“ was enough to secure a first league title since 2005, despite their obvious struggles since Sean Maguireâ€™s departure in July.

John Caulfieldâ€™s side have struggled to score since the 23 year old strikerâ€™s departure, and the fact that he remains the leagueâ€™s top scorer three months after joining Preston with 20 goals shows what Cork are missing.

Derry City’s Rory Patterson almost spoiled the impending party in the first half with a cheeky chip, butÂ Mark McNulty managed to tip his audacious effort over the bar.

Garry Buckley had two efforts saved for the home side, butÂ Harry Monaghan spurned a glorious header to put the Candystripes ahead from a corner.

The atmosphere inside Turners Cross was understandably tense, but the final whistle signaled raucous celebrations from the 5,587 strong crowd inside the Cork stadium.

“I didnâ€™t think it would take two nil-all draws to get us over the line, it has been difficult, we set an incredible pace at the start of the season and then to lose an Irish international and we struggled to score,” Caulfield admitted afterwards.

“It was about managing that, getting over the line and to be fair to the lads, they have been great, and the fans, who have been 12 years waiting,” the Cork boss continued.

“Our first two thirds of the season was phenomenal, we stuttered a little bit and it was all about managing it so to win it with a couple of games to go, Iâ€™m delighted.

“To be fair, Dundalk have been great champions with great management and great players. They set incredible standards, but we felt after winning the cup last year that weâ€™d go to another level.â€

Corkâ€™s next focus will be on retaining their FAI Cup title, with Dundalk awaiting them in the final for the third consecutive year. 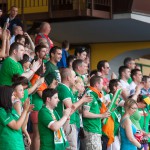